Unlike Kim Jee-woon’s I Saw The Devil, The Unjust stands as a complex thriller, with no hardcore violence but lots of dark humour instead. Where the very idea of “Unfair deal” – which is more close to the original korean title, poisons every relationships. The story may be a little hard to understand at first, but Ryoo Seung-wan did a great job, creating interesting visuals (spoilers inside).

A small focus adjustment can be quite more effective and interesting than editing. In this film, Ryoo Seung-wan often plays that way between the background & foreground, without making any camera movement. Slightly affecting the current situation of the shot, without cutting nor rushing it.

For example, the open air meeting between the cop & the prosecutor. The change of focus underlines what they represent, the idea that they’re on two different layers. The cop with his cigarette and the sunshade shank vs. the prosecutor and the 2 massive buildings. Somehow, you can already understand, who is the strongest here.

Following this open air discussion, the cop is obviously quite angry. He’s in a phone booth, the night has fallen, but you can still see the buildings behind him. The fast camera movement literally compresses him against these buildings, reinforcing his loneliness/failing. No more different layers here, he’s now stuck.

It means that every characters tries to satisfy his own interest but eventually, something unexpected comes up. Radically changing the plans, and so the power struggle itself. In other words, no one is really the stronger, no one is really the weaker. Take the cop for example, with this interesting visual pattern: almost the exact same position, yet, not the same aura. Some of the black humour of the film comes from this power struggle game.

Same idea, but with another example of visual pattern reflecting how every character tries in his own way to be the stronger one. And it’s kind of ridiculous, because they can do it, only by repeating the humilitation they have personally experienced or inflicted. Like the “stretchy cheek” move. The cop did it to the mob boss, who did it to the suspect. It’s like a chain of frustration, always taking it on the weakest people around.

In the final part of the story, the cop & the mob boss find themselves totally isolated. To point out this ironic and paradoxical turn of events, Ryoo Seung-wan show these 2 characters alone in their own environnement. In fact, they now have what they want, but there’s (almost) nobody left to support them. What comes next will only underline their fall (the superintendent office was always shown apart from the rest, and the arrogant mob boss is literally brought down-to-earth).

Visually interesting, yes it is, but The Unjust suffers from an unnecessary overly complicated story, lacking emotion & real drama. Making it quite cold, and harsh to really get all the subtleties of each relationship. Still, Ryoo Seung-wan’s work is stunning, this guy is always trying to find new ideas, but at the same time, he’s maybe overthinking his film, keeping a gap between an apparent complicated script and the essence of this tragic/absurd story. Which is taking us inside the korean justice system. Quite ambitious indeed! 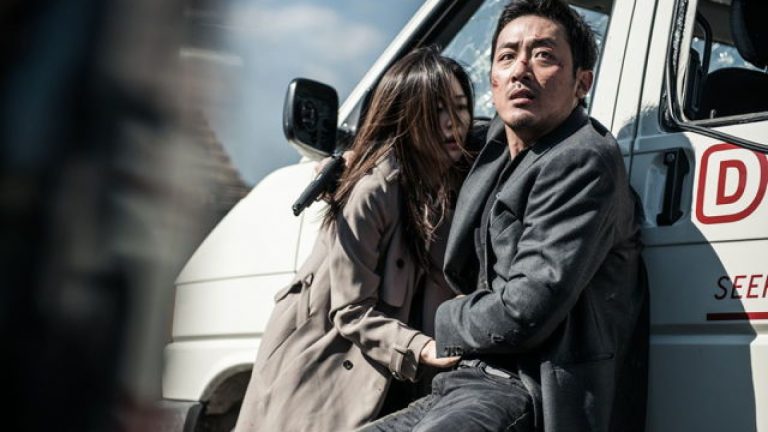