A manga artist is in a coma, the big question is: how to wake her up?

The Japanese film industry tends to produce mostly live-action adaptations of popular mangas or TV dramas, starring idols or well-known singers, these productions are aiming to be as riskless as possible, tasteless too. Even some of the best Japanese directors are suffering from this situation, failing to fund some original and personal projects.

Which happens to be the case of Kiyoshi Kurosawa, who spent several years far from the director’s chair after Tokyo Sonata, he finally came back with the TV series Shokuzai — originally 6 episodes that have been later edit into 2 movies, for the international market. Since then, the director has found his way to keep working, even though some projects have experienced some difficulties — such as 1905, due to tensions between China and Japan.

With Real, Kurosawa basically tells a love/drama story with sci fi/psychological elements, about a man entering 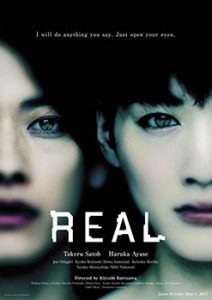 into the mind of his girlfriend, who is in a coma. The themes involved here? Communication beyond borders, the deep psychological consequences of a past-trauma… The film mixes different genre, as a result, it looks like an enigmatic, strange and highly symbolic maze. After all, it is a trip into the human mind!

Choosing a low-key approach, the film doesn’t make an outrageous use of VFX, keeping things simple and down-to-earth. The story works like some kind of therapy, while slowly taking new directions. Kurosawa takes advantage of the fantasy elements, which gives him the possibility to visually recreate the world of the mind, with people wandering in this out-of-time space filled with memories, like some lost ghosts.

But, behind this story of a man trying to figure out what’s happening, the film offers quite a confusing mystery experience. And trying to understand the inherent logic of this story tends to cut off the emotional involvement. Kurosawa is so focused on creating this complicated world which has its own codes, to let the audience think about everything, that some narrative choices become obvious way too early, killing off the excitement or the interest.

Despite Kurosawa’s nice directing style, the visuals are always meaningful and symbolic — revealing something 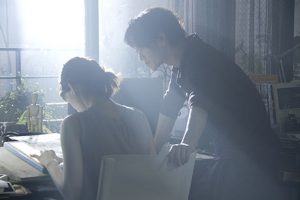 about the character’s state of mind, of the relationship between the couple. But, it is dull and slow. Boring, in fact. Kurosawa may develop an intriguing symbolic network through the story, trying to explore the subconscious, giving something deep to be analyzed in order to connect all the dots in the story, Real fails to be engaging.

Delivering visuals way beyond the standards of the actual Japanese film productions, Real proves to be a mysterious maze working on a symbolic level, leaving almost no room for an emotional involvement, it only requires the audience’s intellectual brain.